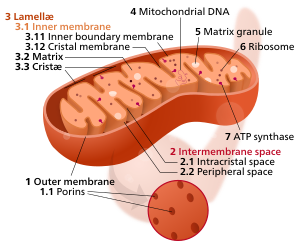 A crista (/ˈkrɪstə/; plural cristae) is a fold in the inner membrane of a mitochondrion. The name is from the Latin for crest or plume, and it gives the inner membrane its characteristic wrinkled shape, providing a large amount of surface area for chemical reactions to occur on. This aids aerobic cellular respiration, because the mitochondrion requires oxygen. Cristae are studded with proteins, including ATP synthase and a variety of cytochromes.

More recent research (2019) finds rows of ATP synthase dimers (formerly known as “elementary particles” or “oxysomes”) forming at the cristae. These membrane-curving dimers have a bent shape, and may be the first step to cristae formation.[4] They are situated at the base of the crista. A mitochondrial contact site cristae organizing system (MICOS) protein complex occupies the crista junction. Proteins like OPA1 are involved in cristae remodeling.[5]

Crista are traditionally sorted by shapes into lamellar, tubular, and vesicular cristae.[6] They appear in different cell types. It is debated whether these shapes arise by different pathways.[7]

Electron transport chain of the cristae[edit]

NADH is oxidized into NAD+, H+ ions, and electrons by an enzyme. FADH2 is also oxidized into H+ ions, electrons, and FAD. As those electrons travel farther through the electron transport chain in the inner membrane, energy is gradually released and used to pump the hydrogen ions from the splitting of NADH and FADH2 into the space between the inner membrane and the outer membrane (called the intermembrane space), creating an electrochemical gradient.

The cristae greatly increase the surface area of the inner membrane on which the above-mentioned reactions may take place. A widely accepted hypothesis for the function of the cristae is that the high surface area allows an increased capacity for ATP generation. However, the current model is that active ATP synthase complexes localize preferentially in dimers to the narrow edges of the cristae. Thus, the surface area of mitochondrial membranes allocated to ATP syntheses is actually quite modest.

Mathematical modelling suggested that the optical properties of the cristae in filamentous mitochondria may affect the generation and propagation of light within the tissue.[8]